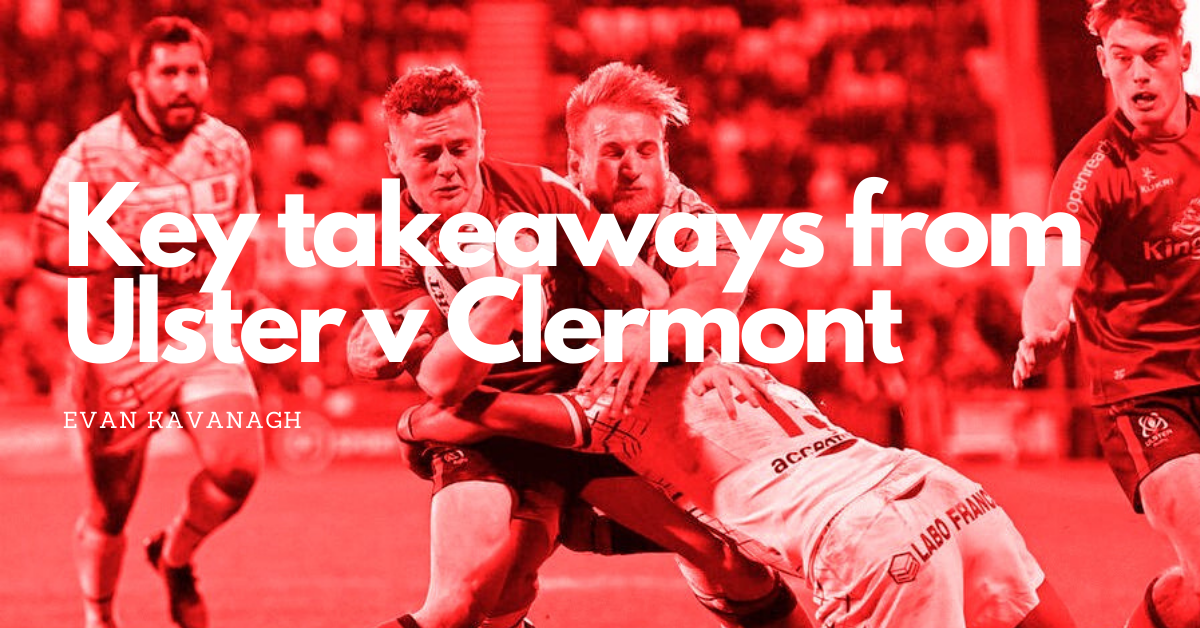 4 wins from 4, a place in the knockouts and a first unbeaten run through the pool stages since 2013/14. Regardless of who they were to face next, Ulster’s players could be forgiven for celebrating the final whistle a little more than usual on Saturday.

Facing the sobering reality of being knocked out in the pool stages and a Challenge Cup run just last season, the 2021/22 European campaign has already seen this squad make measurable progress over the last 12 months.

Only 5 of the current playing squad (answers on a postcard) were part of the aforementioned class of 13/14 under Mark Anscombe. However, Ulster’s 34-31 win over Clermont also represented an ideal result in many ways for Dan McFarland and his coaches, with many valuable lessons learned even in victory; two (and a half) of which we’ll now take a closer look at from Ulster’s 5-try win.

In a game where the headline figure will read 31 points conceded, praising Ulster’s defence may initially raise some eyebrows. However, their defence was arguably one of the most impressive aspects of Ulster’s performance after the first 69 minutes in which Clermont scored only 12 points.

Much of Ulster’s early successes in defence, and indeed failures later in the game, were based on how connected they stayed without the ball. Take Ulster’s opening defensive passage for example and there’s plenty of evidence of strong decision-making leading to small wins.

In the clip above we see lots of good habits instilled by Defence Coach Jared Payne –  players scanning the attack, good spacing, the defence sliding across as one line, clear communication, adaptive line-speed – all of which allow Ulster to stay connected and cause Clermont problems.

Although it’s not a turnover, that connectivity enables Rob Herring to do especially well here and commit 5 players to a ruck while bouncing out himself; simultaneously robbing Clermont’s attack of options while slowing it to a snail’s pace. This ability to make Clermont overcommit to rucks would be a theme of the first half especially.

As we roll the play on, this red wall also helps wider out as James Hume and Kieran Treadwell catch Alivereti Raka behind the gainline – compelling JJ Hanrahan to eventually kick the ball after failing to break the Ulster line for more than a minute of play.

So, what was it that caused Ulster’s defence to start conceding so many points? Let’s compare it with a similar situation in the 73rd minute of the game to see.

If we go back to the 3rd minute clip for a moment, notice how Ulster come up slowly against the deep midfield pod in order to buy themselves time to make a decision, before firing up on the more isolated Raka.

By comparison in the 73rd minute, Ulster’s defensive line shoots up on the deep midfield pod, robbing themselves of time to cover across and exacerbating spacing issues out wide. 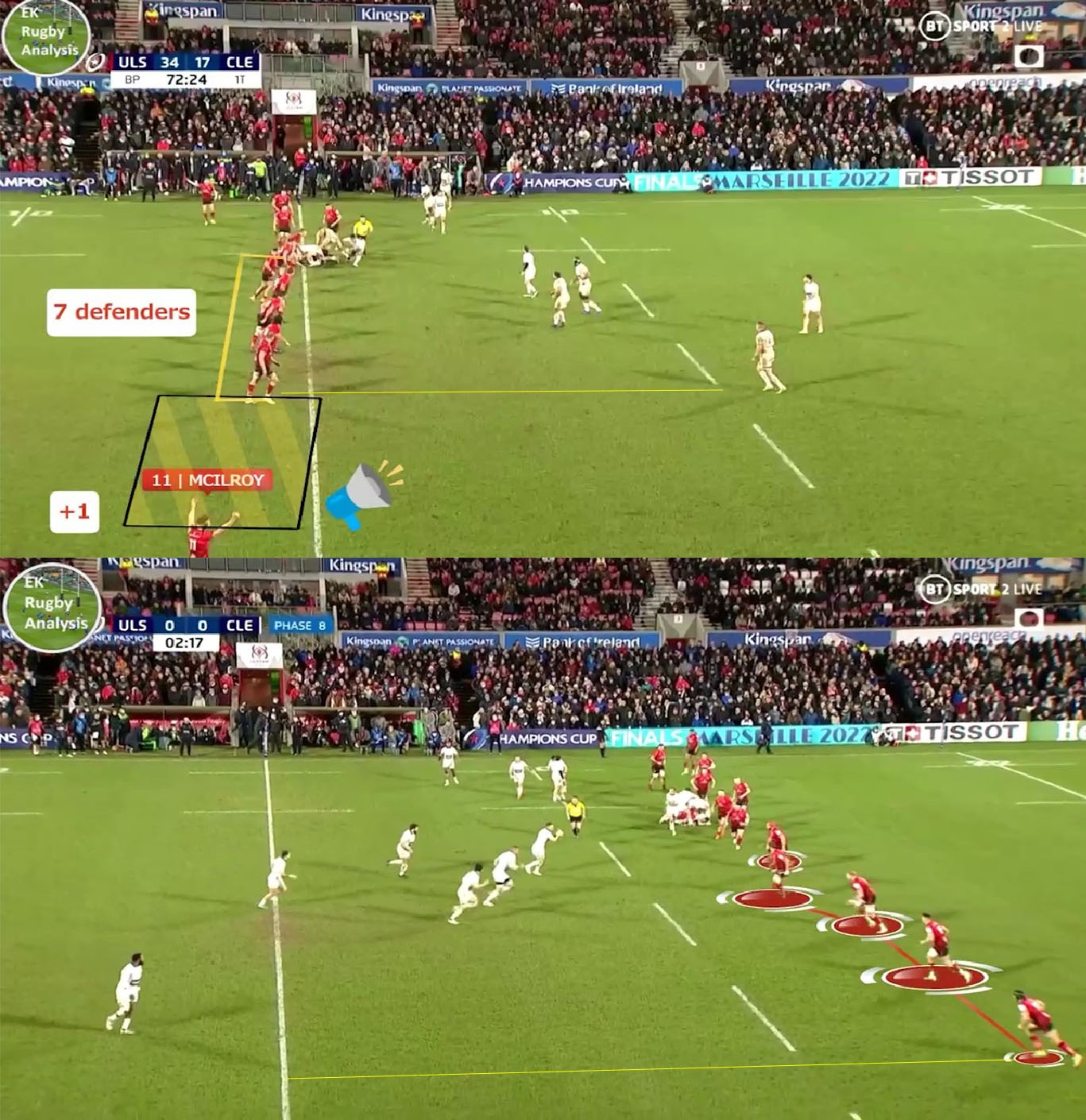 These spacing issues become more apparent when comparing the two stills above, with McIlroy visibly calling for his teammates to fan out wider across the pitch.

Although there were certainly individual decisions that could have been better too in the lead-up to Raka’s try, gaps like these are hard to compensate for in the long run and cropped up for two of Clermont’s tries last weekend.

However, when the game needed to be won, it was a credit to Ulster that they found their shape again.

Off the back of some excellent work on the inside from his teammates to link the chain, James Hume makes a superb tackle on Marvin O’Connor here, only bettered by Robert Baloucoune on Judicaël Cancoriet to win Ulster the turnover and chance to see out the game.

When Ulster succeed in ‘connecting the dots’ like scanning the attack, setting wide and picking the right time to blitz, they’re a very hard team for anyone to beat. As Dan McFarland alluded to afterwards, the key learning in defence from this game for Ulster will be staying switched on.

Much has been made of the potential of Robert Baloucoune and Michael Lowry in recent years, with both now starting to be recognised for their ability across Ireland having been selected in Andy Farrell’s most recent Six Nations squad.

At 21 years old, Ethan McIlroy is at least a couple of years younger than both and looks a precocious talent in his own right too, with this score going to be hard to beat for try of the season.

Indeed, many acknowledge that Ulster look very well set for in the back three for years to come, with the aforementioned having an average age of 22.7 and Jacob Stockdale amongst others still waiting in the wings.

However, while it’s been attacking highlights that have caught the eye in the previous months, what really stood out from Ulster’s win last weekend was just how solid Lowry, Baloucoune and McIlroy were under the high ball – catching every single kick directed at them.

Here’s a compilation of Ulster’s catches

In the context of the game against Clermont, this was particularly valuable as Les Jaunards struggled to break down Ulster with their running game for 69 minutes and were unable to get any easy field position from kicking either.

With the Ireland coaches likely watching, this will have done no harm to the claims of Lowry and Baloucoune in the weeks to come.

Jared Payne has certainly made impressive strides with Ulster’s defence since stepping into coaching post-retirement, but a great deal of credit also must also go to Forwards Coach Roddy Grant for how he’s transformed Ulster’s maul into a consistent source of tries in recent seasons.

That proved the case again last weekend as Ulster scored two maul tries against Clermont, with Rob Herring being the beneficiary on both occasions.

The first try came in the 8th minute off the back of a 6+1 lineout. When we talk about ‘+1’ lineouts, it essentially means that there are 6 players standing in the lineout itself, with a forward being the ‘+1’ at first receiver instead of the scrum-half.

Why you’d have a forward at first receiver becomes a lot more apparent when teams set up 5 metres from the tryline, as the clip above highlights.

Nick Timoney is the first receiver in this case, and speeds up the transfer of the ball to the tail of the maul by taking it from Treadwell before adding his bulk to the drive having palmed the ball back to Herring.

While the other players set the maul, Marcus Rea also has an important role in determining which way the maul ultimately goes. By joining to the right of Duane Vermeulen and Timoney here and driving left, it allows Ulster to peel around and find a weakness in the edge of Clermont’s maul defence.

Perhaps the most potent part of Ulster’s maul technique is the ‘hug bind’ that they employ at the maul’s head. With it pretty doing what it says on the tin, lifters Eric O’Sullivan and Alan O’Connor hug the jumper – Treadwell here – once he lands on the ground.

This crucially closes the gap between the lifters and jumper, stops defenders squeezing through the middle to get the ball, points the head of the drive and allows Ulster to pivot left or right more smoothly than wider binds would at maul time.

Ulster do get a little lucky here not to be penalised for getting ahead of the jumper but, once O’Sullivan pivots and Rea drives left, the province are in a great position to score. Herring then waits for his cue and the defender at the edge of the maul to commit (Raka) before muscling his way over the line.

What will likely please Ulster most about their second maul try is that they used an almost identical approach, Clermont knew they were going to do it and Herring still scored.

Despite being challenged in the air this time, Treadwell secures and transfers the ball again. Marty Moore is the engine at the back instead of Rea, but a great deal of work is also done by O’Connor to somehow keep the left side of Ulster’s maul up.

With Clermont providing a much more stubborn defence second time ‘round, Timoney and McIlroy join beside Herring to add one last shove and Herring does very well to duck inside Yohan Beheregaray to score.

There were plenty of other takeaways from this Clermont game –  kickoff turnovers, early penalties, interesting attacking patterns etc. but to save this article from getting any longer we’ll finish with a post-match quote from Head Coach Dan McFarland –

“I relish the thought of playing Toulouse, […] We know how tough they are to beat but that’s another chance for us to test ourselves against them.”

If Ulster continue their current excellent form, what a brilliant test it will be.