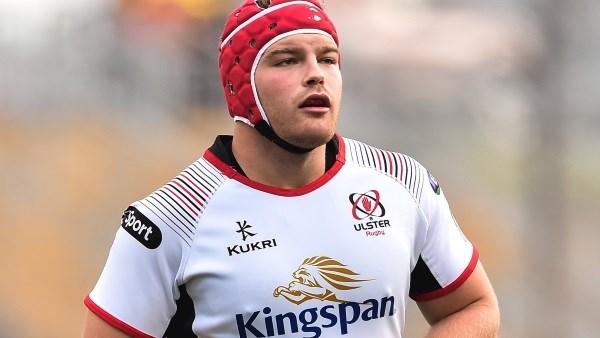 O’Sullivan was one of several stand-out performers at Parc y Scarlets on Friday night, playing a starring role in Ulster’s bonus point win. The Dublin born 23-year-old loose-head prop earned plaudits for his impressive 80-minute display, putting in a huge defensive effort (18 tackles), carrying well and showing he is no pushover in the tight.

It has been a whirlwind season for O’Sullivan. His rapid promotion to the senior team and first Heineken Champions Cup start are testament to his hard work and impressive contributions this season, predominantly coming off the bench. O’Sullivan, who is in his first season of senior rugby, could be forgiven for being daunted at the prospect of going head to head with seasoned Welsh international, Samson Lee. However, rather than dwelling on the formidable task that lay ahead of him, on Friday morning O’Sullivan, still studying at university, kept himself occupied with finishing an assignment on public sector accounting.

“I had a uni assignment to hand in so I spent my morning doing that. It was good because I didn’t spend hours focusing on the game getting too built up or focussing on it.”

“Regardless of what level I’ve played at, I try to keep the same process and treat it like any other game. For three or four hours, it was head down and focus on the game.”

Indeed, apart from his studies at university, O’Sullivan says he still has a lot to learn about the challenge of playing rugby at this level.

“It’s about trying to learn so much more, getting in on analysis, working on my running lines, maul D, scrum set-ups, everything like that.”

O’Sullivan admits that it has been difficult making the step up to this level.  Ulster had to dig deep in Friday’s tight encounter and O’Sullivan confesses to watching the clock count down as the team produced back to back defensive sets. The pace and intensity of the game are one thing, but, as a relatively young and inexperienced prop, to come up against exponents of the propping dark arts is another challenge altogether. He credits the support and advice of his more experienced colleagues for helping him with his transition into senior rugby, in particular, Ulster captain Rory Best.

“It’s incredible, he’s always in your ear before every scrum with little tips, little nuggets, just to keep you focussed and keep your head in the game.”

“Coming up against someone like Samson Lee, it definitely helps having Rory beside you against an experienced operator. There are times out there when you’re struggling but guys are chirping at you trying to encourage you to keep going.”

O’Sullivan has taken monumental strides forward in the past few months and made sure to seize his opportunity on Friday night with both hands. Scrum coach Aaron Dundon and head coach McFarland will be encouraged by O’Sullivan’s set piece contribution, proving himself to be trusty anchor in the scrum as well as his blistering work in the loose. O’Sullivan clearly relishes the physical side of the game and fully intends to bring an aggressive edge to the Ulster pack.

“We’re working hard with Aaron and Dan, just trying to progress. We knew our roles but it was just about getting more aggressive in there and drilling boys when we got the chance.”

“That’s been big for us, being more aggressive with teams and not willing to take a backwards step. We’re fighting for every inch.”

Not one to rest on his laurels, O’Sullivan says Ulster need to immediately shift their focus to another tough encounter against the Scarlets this week.

“I am just taking it one game at a time. I’m just delighted to be out there and getting wins. We must build on the back of this – the job is half done and we will be looking to get the same result next week.”

Now that O’Sullivan has firmly established himself in the senior ranks, more opportunities will surely follow for this exciting prospect. If he can maintain that level of performance, it will be difficult for anyone to wrestle the number one jersey off his back particularly as, from the sounds of it, O’Sullivan is not one to back down from a fight.