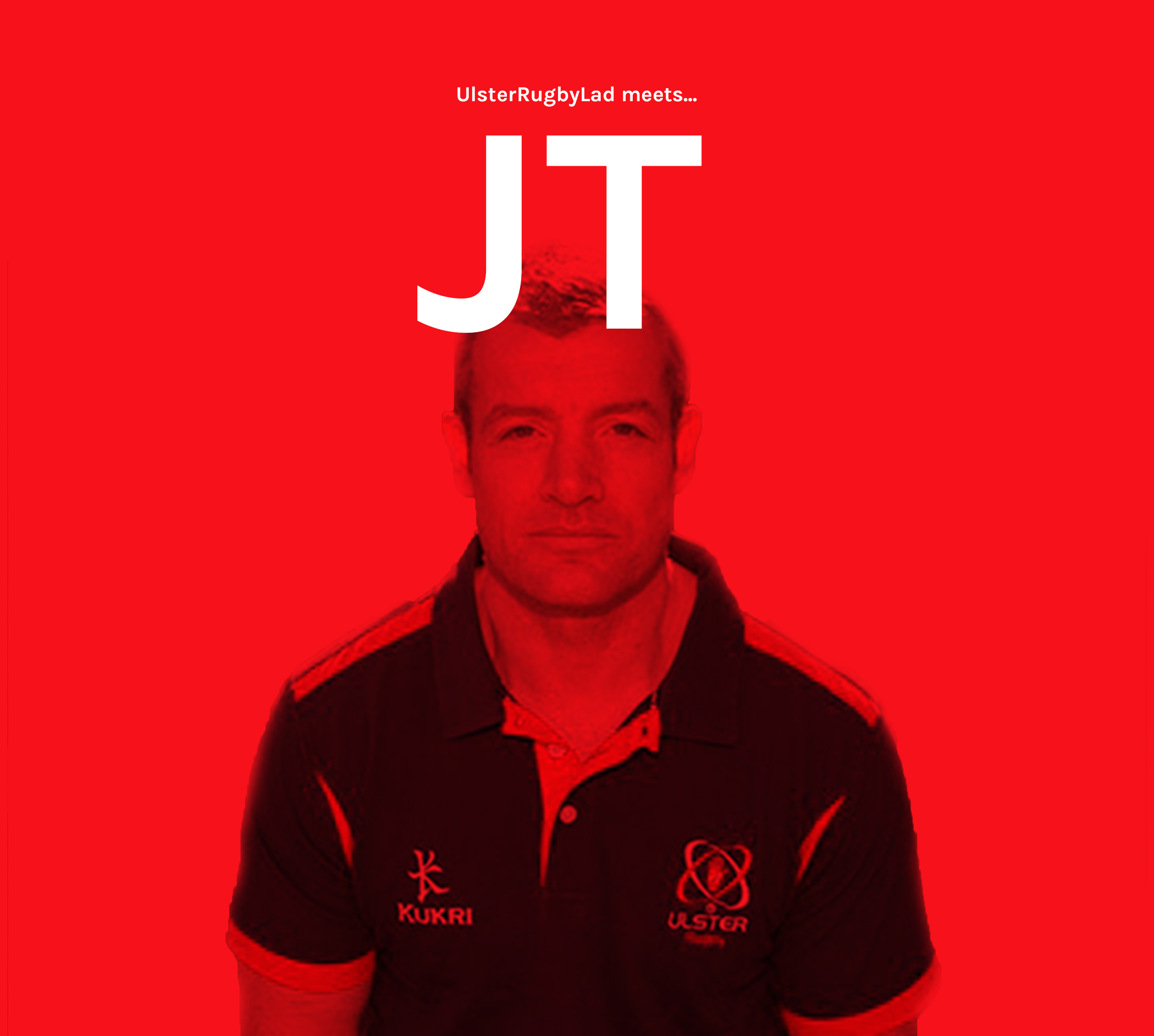 Ulster Rugby Lad recently caught up with former Ireland, Ulster and Ballymena winger, James Topping. As the Elite Player Development Officer with Ulster Rugby, he is responsible for finding and nurturing talent in the province.

We discuss how he developed his passion for rugby, the difficulties involved in finding and retaining home grown talent and the current state of Ulster Rugby.

On getting into Rugby…

Like most guys it was my friends who got me into rugby. I played rugby for the first time at Ballymena Rugby Club whenever I was in P7. All my mates had decided to go so I thought I would go along as well. I went to Ballymena Academy (nearly 30 years ago!) and the two options were rugby and cross country so I was always going to choose rugby!

I still played football on Saturdays but then I was selected for the 1st XV when I was in 5th year at school and that’s when I told myself ‘I better start to take this seriously!’.

We had a really good team. When I was in 5th year we got beaten in the final by Inst 10-9 – one of the few games we lost all year but that’s the way it goes!

In lower and upper sixth I was selected for Ulster and Irish Schools. That gave me a real impetus to push on and see how far I could get in rugby.

I left school in 1993 and I was going to be a civil engineer. It’s not like there was a choice as there was no professional rugby at that stage so I thought I better continue on with education.

It was in my 2nd year at Uni that changed. I had played for Ulster in my first year out at uni. I then went professional, getting to play for Ireland and got my pro contract when I was still at university. It made it easier for me – it hadn’t been my focus as school to make it as a professional rugby player as that option hadn’t really been available. 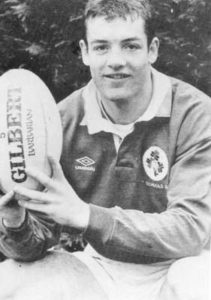 On the differences before rugby turned professional…

When I started playing we just trained at rugby. There wasn’t much outside of that. Strength and conditioning hadn’t really started. You were just left to do whatever you wanted to get ready for playing.

When you got injured you were just told to rest – there was no big push or loads of physio treatment to get you back in and playing again.

We trained on a Tuesday and Thursday and then just played rugby on the weekend. That was the focus for us – the game at the weekend. There was very little squad rotation – the best team was just put out every week. There was no careful scheduling or management of players. If you were fit and the best in your position you were going to get playing.

It meant we were all on a level playing field – the other provinces were doing pretty much the same as we were doing. It was only when you played a French or English team in Europe you noticed there was a big difference – how much bigger, more physical and better prepared they were.

Now, you look at the daily and weekly diaries of the guys and there is so much they are doing to try and improve themselves and keep ahead of the game. It’s completely different.

On his current role…

I went back to work as a civil engineer for 6 or 7 years. Then, when circumstances changed, I approached Ulster and applied for the role of Elite Player Development Officer and, thankfully, I got it.

One of the biggest parts of the role is identification of talent which starts around the age of 14 or 15. A huge part of that is speaking to players and coaches in schools because it can be very hard to cover every game in the entire province.

I often speak to the head of rugby at different schools and they will usually be pretty on the ball with who they think is a talented player and whether they think someone can go the whole way. It’s also really important to ask players who they rate in their team – that gives a really good indication as well.

Once they’re in the set-up there are a lot of different facets to look at. It’s not just the talent to play rugby – it’s the ability to play your role as part of a team and prepare yourself away from the pitch. Also, how young players spend their down time and how they look after themselves when they’re injured are also important factors.

I see talented guys coming through and they don’t make it for a variety of reasons. Certainly, there were guys more talented than me who I played with at school who didn’t come through because they weren’t prepared to put in the work.

We place a huge emphasis on the guys whenever they are coming through that they have to put in the work to get selected. We give them everything they need in terms of the environment to succeed. It’s our job to get guys to the point where they are training with the senior squad.

On key qualities of emerging players…

You have to be able to take criticism well and learn. You should be seeking out criticism. If you shy away from that or ignore your faults and weaknesses then you may survive for a bit but eventually you will get found out.

This ability is hugely important in earning respect of senior players and being accepted by them. That’s the most frustrating thing when some people are really talented but don’t know how to handle the pressure. The pressure will come upon you.

Some people can get away with trying things because their resilience – their strength of character – is good enough. Once they become part of the team and know what their roles are, they need the resilience and confidence in their own ability to stay there.

Jacob (Stockdale) and Keith Earls, for example, are players who play in the back three. Even players at their level have flaws – as all rugby players do – but their attitudes are great. You can see they’re giving 100% every time they play. They make their own luck by finding themselves in the right positions and working hard when they don’t have the ball.

It seems like in 1998/1999 something happened – a lot of talent has come through for players born in those years. Not sure what is was – maybe something they say on TV that inspired them!

The likes of Robert Baloucoune is from Pretora (now Enniskillen Grammar), Jacob was at Wallace. There’s a number of others from schools where School’s Cup success is not the be all and end all – it keeps the drive in them. They want to keep going as they don’t feel they have reached their rugby peak.  There’s a good crop coming through – I don’t want to name names and add pressure but there are some back three guys I have worked with who will hopefully go on and do well.

It’s good to see forwards like Adam McBurney (who came through the club system), Eric O’Sullivan and Tom O’Toole coming into the team. Of course, there will be other guys who take slightly longer to develop and then come into the team and do really well. Matty Rea has come in at the age of 23-24 and done well.

On retaining players and widening the net…

In Ulster, the university brain drain is massive. A lot of guys who play rugby go to mainland UK for uni. People go on to study, get jobs and stop playing rugby.

In Dublin most guys stay and go to Dublin unis and they also benefit from guys coming to Dublin from Limerick and other places as well.

Clubs are a massive thing for us. Mini rugby is really strong – it’s after P7 a lot of guys drift away from rugby.

It all comes back to grass-roots and retaining the good mini rugby players. We all know there’s the group of guys who came through Methody having played mini rugby, played at school and then 8 or 9 of them went on to become professional rugby players.

Keeping players at clubs is important – a well organised under 20s league would be good, not just one-off tournaments. Guys want to play with and against their friends which can be difficult when making the transition to senior club rugby – a limited number will play for the firsts and the retention rate isn’t as good for guys playing down the levels.

It’s about trying to keep the enjoyment factor alive. It may not be until 23 or 24 that people start to play their best rugby. An under 20s league would also be good for those who did not go through the traditional grammar schools route and didn’t have the same platform or coaching environment – it would help keep them in the game. 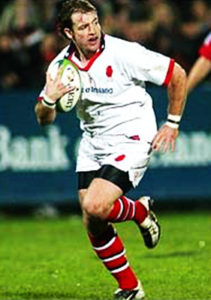 Ulster will continue to push young players into the team. It is really noticeable, this year in particular, because of a number of retirements. The guys who have come in have played really well and have applied pressure on the older professionals.

This is what we need and it benefits everyone – Rory Best would love seeing a few guys below him pushing for a place. Ideally the guys who are 24 or 25 should be getting put under pressure from guys who are 19-20.

Ulster is a club that wants to play in the top competitions all of the time. It makes a huge difference to supporters. We have high aspirations.

Dan, Dwayne, Jared and all the other coaching staff have changed the outlook. The young players coming through don’t look intimidated and the older guys are really welcoming to this younger batch coming through.

I think Ulster will be stronger and stronger in the next few seasons. There are a good number of guys pushing their way through from the academy and this will be really important in giving us a strong squad to pick from – that’s what’s needed to compete at the very top level again.