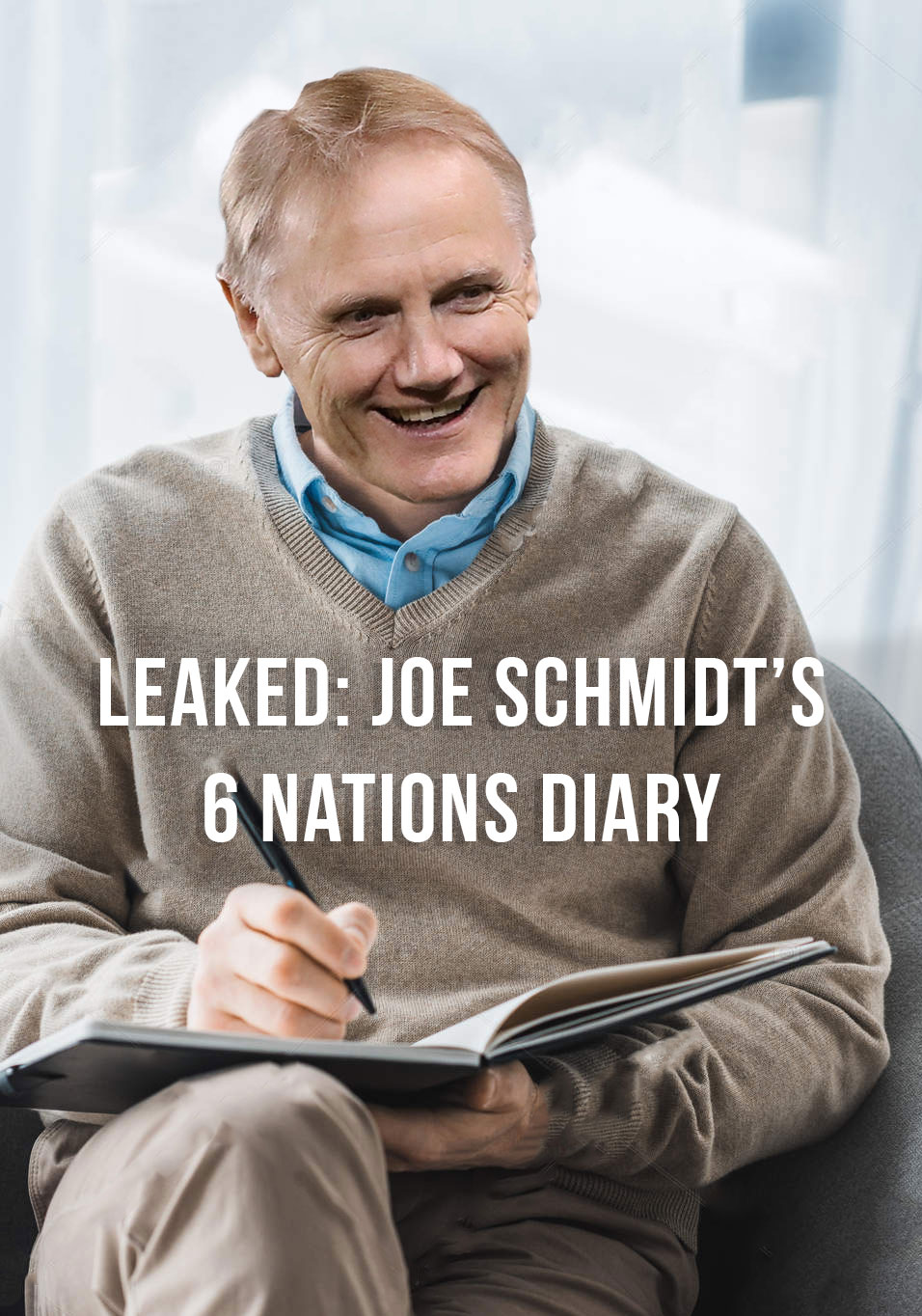 Even after an aggressive full body scrub with two of those tiny hotel bars of soap I can’t get rid of the stench of defeat. My many cats won’t even look me in the eye. I beckon them over for a cuddle but they just walk away, embarrassed.

I thought we were shoe-ins for another grand-slam. Now, we’ve come crashing down to earth with all the dignity of a Gemma Collins pratfall.

Eddie Jones has phoned me twice today. Both times he cackled down the phone for a good 15 minutes. Riled, but wanting to appear not bothered I was like, ‘I don’t even care anyway. I’m super relaxed. I’m just powerwalking around my hotel room to get my step-count up. I don’t even know what game you’re on about.’

He wasn’t having any of it. ‘Joe Schmidt? More like Joe Sh*t!’ he screeched, before hanging up.

‘SHUT UP EDDIE!’ I should have said. But it had taken me a several hours before I thought of this – the perfect response – and the moment had passed. I tried ringing him back but he wouldn’t pick up. Grrr. He ALWAYS gets the last word.

This morning I texted Faz (Andy Farrell) and Simon (Easterby) ‘DEFCON 1’ – I don’t know what that means but I thought it sounded cool – ‘Meet in Little Chef off the M56 lay-by at 2200 hours.’ We convened in Little Chef – our temporary war-room. We sat in silence for what seemed like hours. I was still absolutely seething at Faz for the key role he played in creating his son, Owen.

I eventually broke the silence. ‘Well fellas, what went wrong?’ I questioned.

‘Murray did more box-kicking than someone trying to make space in t’ recycling bin.’ Faz quipped in his thick Yorkshire accent, crumbs from his pasty spilling out of his mouth as he spoke. Even though it didn’t really make sense, it broke the ice and we all fell about laughing.

I felt bad for Faz who has spent the last few weeks putting together a poorly constructed trophy cabinet with the words ‘For t’ winners of t’ 6 nations’ scrawled in biro across the front. He was so proud of it. I didn’t have the heart to tell him we probably wouldn’t be needing it anymore.

I had to speak to the assembled media today. I felt more awkward and ashamed than Liam Neeson giving a speech at the MOBO awards.

The questions came thick and fast. Rugby this, tactics that. Blah, blah, blah. I just wanted to be at home with my cats. They’d understand – they always do. Most of them could probably do a better job than Henshaw at full-back. I know I’m being harsh but I think I’m just tired. Time to curl up with my dozen or so cats and get some sleep…

We’ve got Scotland tomorrow. Henshaw’s been dropped due to a dead leg I gave him on the team bus for a laugh. The rest of the boys have also been giving him a hard time this week – he now also has atomic wedgie and titty-twister related injuries which could rule him out for another few weeks.

It never rains, it pours… I’ve just been told Big Dev sat up too quickly this morning and hit his head on the top bunk – now he’s out as well. FML.

Faz was supposed to be doing video analysis to work out our defensive strategy but when I walked in on him earlier he was watching ‘Flubber’ on his laptop. He just looked up and said ‘eee this is right good our Joe’. I decided to leave him be.

As for the hotel we’re staying in in Scotland… well it’s not exactly the Ritz. They deep fried my salad and they only serve one drink – Tadgh is about to go into an Irn-Bru induced diabetic coma.

In the immortal words of D:Ream ‘Things can only get better!’ Here’s hoping!

Signing off for now,