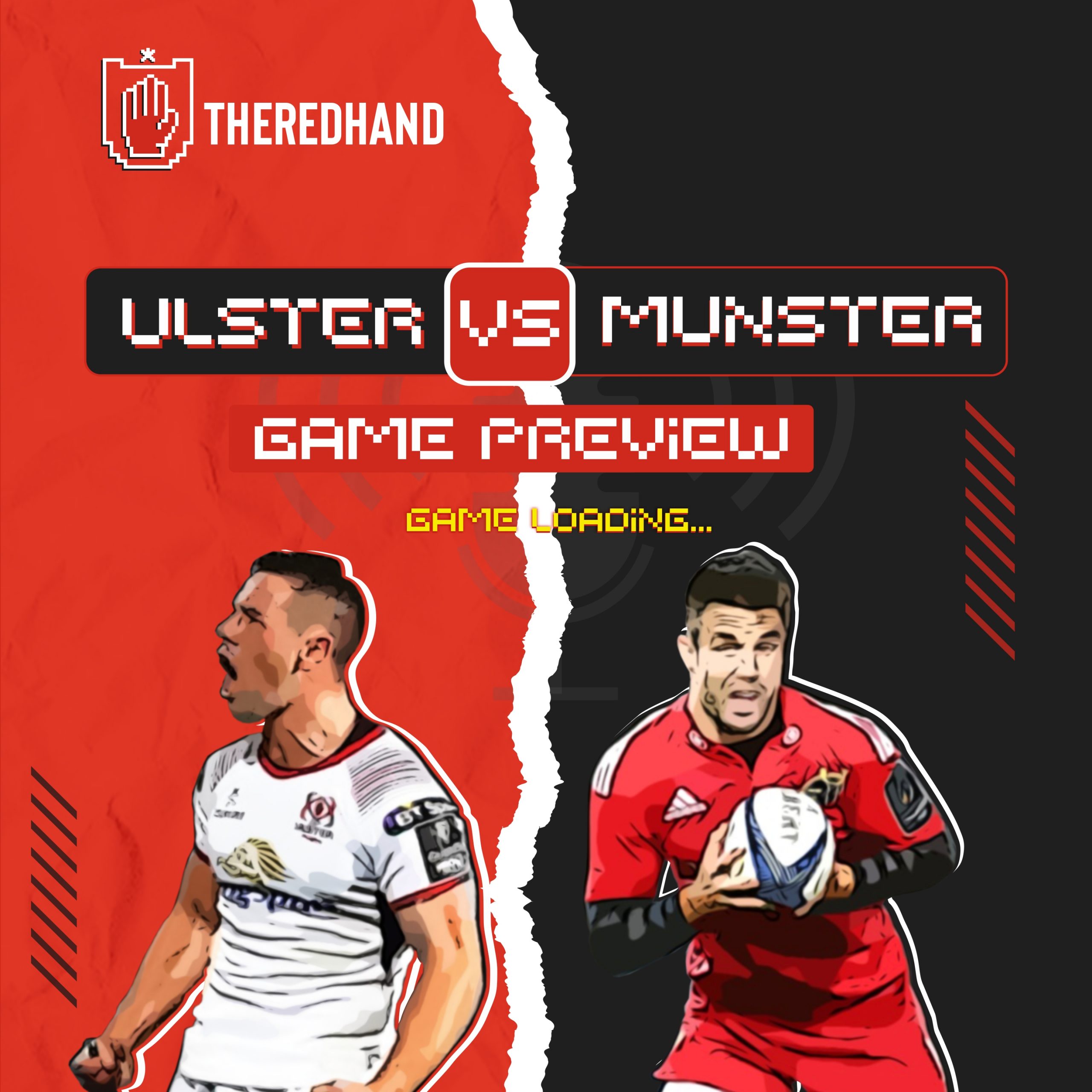 If this fixture was a month ago you’d have to say Munster would have been the favourites. Both they and Ulster had lost to Toulouse in Europe, but Munster seemed to lose better in the strange sense that the positives from their agonising penalty shoot-out defeat were supposed to spur them on to a real crack at the URC crown. This was only a fortnight after a Peter O’Mahony-less Munster beat Ulster in Belfast as well.

Fast forward to June and that narrative has been completely flipped thanks to Munster losing by ten points to those at Leinster who couldn’t crack the Champions Cup squad (bar two lads who made the bench). Behind all the furore of the Irish rugby community trying to make sense of Munster’s Jekyll and Hyde fortnight, Ulster have returned to winning ways with confidence-boosting victories over Edinburgh and the Sharks, two fellow URC playoff teams.

Yet for all the talk of Munster being directionless in attack and too inconsistent overall, they have shown an ability to turn up and compete on a big match day. That cannot be discounted.

Where they excelled against Toulouse was largely at the breakdown where O’Mahony, his backrow mate Jack O’Donoghue and to a lesser extent young loosehead Josh Wycherley had a field day in turning over ball on the floor.

"I think he's playing the best rugby of his career!"

Just Peter O'Mahony embodying everything that it means to be a Munster player 🥰#HeinekenChampionsCup pic.twitter.com/7dIn2f9lEe

Yet today’s team news was not good on that front for Munster since O’Donoghue is not fit to play. Alongside John Hodnett, that’s two excellent jackal threats missing, while reports from earlier in the week that Tadhg Beirne might be fit for the first time since the Six Nations proved to be incorrect.

With those absences and the likes if Duane Vermeulen, Rob Herring and Nick Timoney in tow for Ulster, it’s hard to say anything other than the breakdown advantage lies with the hosts. Either way, it’s two teams who love to spoil opposition ball going at it, good luck to Jaco Peyper in wading through that mess.

Where Munster also impressed against Toulouse was their ability to catch scrumhalf Antoine Dupont behind the gain line by flooding numbers through breakdowns and mauls; not always legally in terms of the offside line, but they got away with it. While John Cooney is important to Ulster’s attack, no one relies on their 9 as much as Toulouse do on Dupont so such a tactic shouldn’t be as detrimental to Ulster going forward.

That’s all just from one game though, the last time Munster put in an impressive performance. What about the numbers from across the URC campaign? The set-piece statistics suggest an even battle. Munster have the better lineout in the competition to date with a success rate of 89 per cent to Ulster’s 87, though Munster have had far fewer lineouts, perhaps illustrating how Ulster rely more on theirs to launch phase play.

The scrum is interesting because Munster have a better success rate in terms of holding onto the ball, but Ulster give away fewer scrum penalties. Given the demolition job Toulouse did on the Munster scrum and their greater ill-discpline there, you would have to think that Herring, Andrew Warwick and Tom O’Toole fancy gaining the upper hand.

The URC website ranks Ulster’s defence as the best in the league by averaging out a number of metrics including points scored, tackle success rate, turnovers won etc. This tallies with previous analysis done on the Red Hand that shows how Ulster do a better job of staying connected in the defensive line than plenty of other teams.

In attack, Munster are ranked higher in 7th than Ulster down in 11th. This probably doesn’t match the eye-test given Ulster’s backline is regularly praised for its ability to beat defenders while Munster’s attacking game has been taken to the cleaners in the press.

What is interesting is that Ulster have made more clean breaks (90 vs 82) and more metres (6139 vs 6000) than Munster, but the Limerick side has scored more tries (66 vs 52). Ulster may have more exciting attacking individuals in the likes of James Hume, but Munster appear to be more efficient when it comes to turning positive running passages into points. What’s more, the absence of Mikey Lowry with a broken cheekbone is massive both for Ulster’s attack and Munster’s kicking game – in theory they should be happier to kick possession away knowing he is not there to punish a loose chase.

But what about how Ulster’s attack matches up to Munster in terms of style? This is where Dan McFarland’s side has an edge. Like a lot of teams, Munster can be got at on first phase from the 13 channel to out wide. Leinster did so when winning at Thomond Park in April, but so did Exeter during the Champions Cup last-16 for Stuart Hogg’s try in Sandy Park (and to a lesser extent in the return leg in Limerick, though they probably should have exploited it more).

Incredible @ExeterChiefs move, fantastic run by Tom O’Flaherty to create the space for Stuart Hogg to fly in for the try 🙌

Great seeing him play with a smile on his face 😌#HeinekenChampionsCup pic.twitter.com/QOnGEYFS33

Chris Farrell is generally a good defender but here he was forced to bite on a hard decoy from Ulster-bred Ian Whitten. There is another Ulster inside centre still on the club’s books who is more than capable of causing havoc with the space his decoy lines open up out wide. What’s more, Stuart McCloskey’s physicality and ball-skills in his midfield channel present their own problems.

There is one final passage from Leinster’s recent win over Munster at the Aviva that illustrates another Ulster edge in attack.

Leinster show an ability to play one more pass behind a forward pod to manipulate the backfield, to force the ball wider and lure Keith Earls up into the line. This allows Ciarán Frawley to kick deftly in behind for Scott Penny to gather and score.

A weakness in Munster’s backfield coverage has been identified here in that the two men they drop into the backfield – outhalf and fullback – are slow to cover across when their wings shoot up into defensive line. Ulster definitely have a developed forward pod attacking system to be able to get the ball into the middle of the park to open up similar pockets of space. In Billy Burns, they have an outhalf with a good enough kicking game to exploit that space.

In terms of using forward pods to manipulate space elsewhere on the park and the ability to exploit that, my hunch is that Ulster’s attack is more developed than Munster’s.

For all their strength and weaknesses, the difference between the two sides is likely to be marginal, which is where individual scores become vital. In that regard, Ulster’s record as the most disciplined side in the URC in terms of penalties conceded is noteworthy. That alongside the Ravenhill factor could well be the winning of what is likely to be a one-score game.

For the rugby nerds: https://www.unitedrugby.com/statistics all stats and tables here.