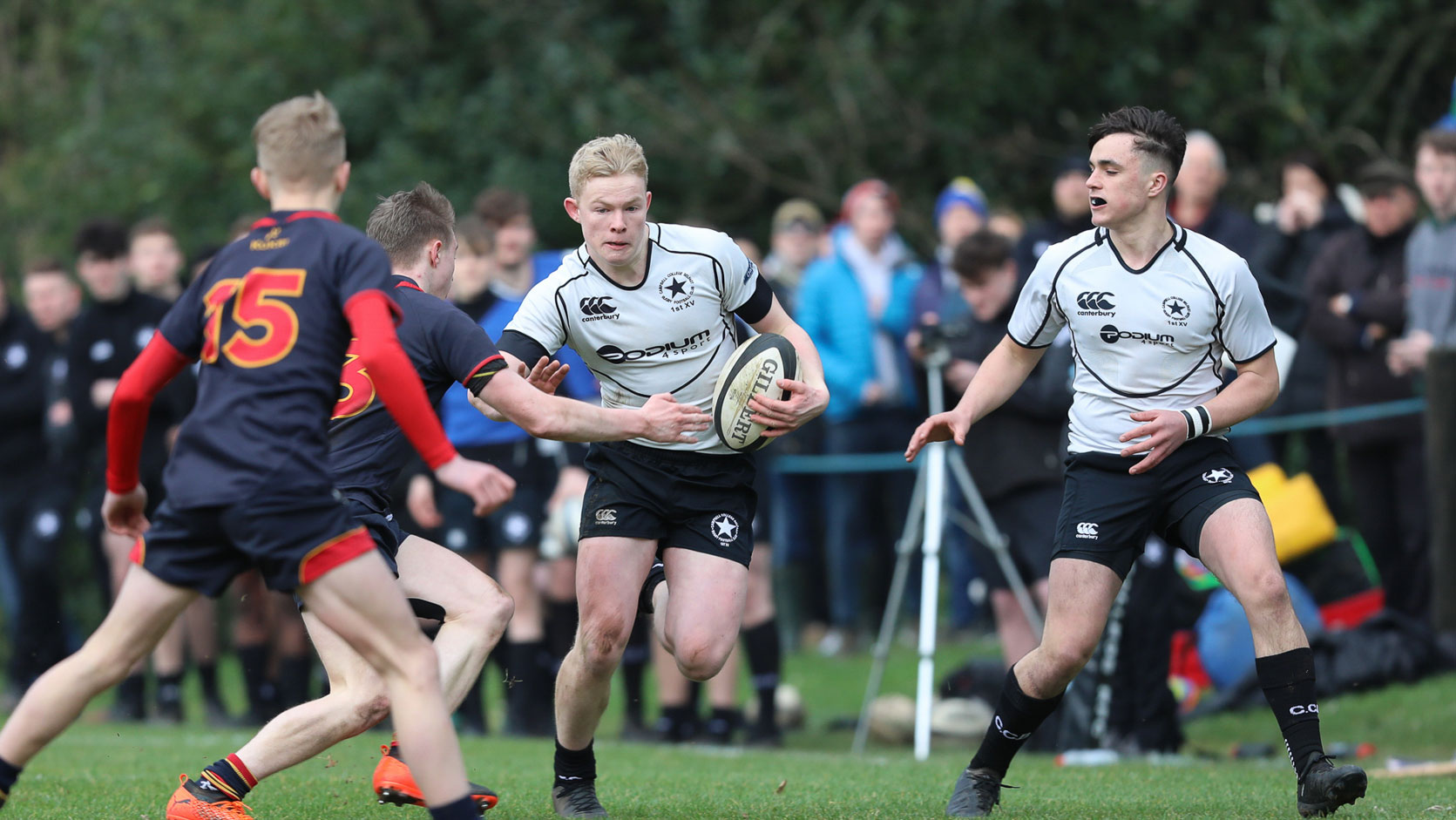 Campbell College have secured their place in the semi-finals of this year’s Schools’ Cup, beating Enniskillen Royal Grammar 38-22 in Saturday’s quarter-final tie.

The large travelling support matched the home crowd, who were also in full voice, creating an electric atmosphere at Fox’s Field. Buoyed by the level of support, both teams started the game at a frenetic pace. As both sides settled into the game, Campbell dominated territory and worked their way into the Enniskillen half. Some strong carries from members of the imposing Campbell pack put Enniskillen on the back foot in the opening stages.

Campbell broke the deadlock after 10 minutes, with Dara Gaskin opportunistically exploiting space at the side of the ruck to put his team ahead with yet another try to add to his tally this season.

It didn’t take long for Enniskillen to respond however, with out-half, Eddie Keys, slotting a penalty after 17 minutes. Eddie, the son of Enniskillen forwards coach, Alastair Keys, controlled the game well and was instrumental in getting the backline moving for the visitors.

Campbell continued to win the battle for possession in the first half however Enniskillen’s staunch defence limited Campbell’s dangerous attacking options. Mid-way through the first half, Campbell hooker Jack Boal was the grateful beneficiary of a charged down kick from the Enniskillen scrum-half, as he scampered over the line to extend his side’s lead.

The Enniskillen line-out functioned well and they used their attacking maul to great advantage throughout the game. Campbell however, started to hit their stride, playing an expansive style of rugby, utilising their pace out wide through Danny Willamson, Rex Tinsley and Conor Rankin. After a period of extended pressure, Ollie Ralston was able to punch a hole in the Enniskillen defence and cross the whitewash for Campbell’s third try.

Enniskillen regrouped and worked their way back up the field, recycling the ball well and patiently edging ever-closer to the Campbell line. Number 8 Callum Smyton eventually rumbled over the line to give Enniskillen momentum just before the half-time whistle.

Campbell came out all-guns-blazing in the second half and it didn’t take long before John Gildea added their fourth try, leaving Enniskillen to fight a difficult uphill battle.

Enniskillen continued their robust defensive performance however after several waves of attack, it was Campbell number 8, Tobi Olaniyan, who powered over for Campbell’s fifth try. Olaniyan, along with his back-row colleagues, Ben Rainey and James Johnston, put in a typically strong performance, hammering away at the breakdown as well as demonstrating their strong ball carrying ability to help put their team on the front foot.

Enniskillen showed no signs of rolling over, and continued an admirable fight-back. Smyton scored another try on 62 minutes and secured his hat-trick in the last play of the game. Although these were ultimately consolation tries, the young Enniskillen side, many of whom are in year 12, demonstrated great resolve in the face of a formidable challenge from the current holders, Campbell, and deserve credit for their relentless work-ethic.

Credit must go to Campbell for playing a fast, attacking brand of rugby and for their dominant tackles in defence.

The overall quality of play and work ethic from both sides was impressive however it is Campbell who progress and will play RS Armagh in the semi-finals on Tuesday 5 March.