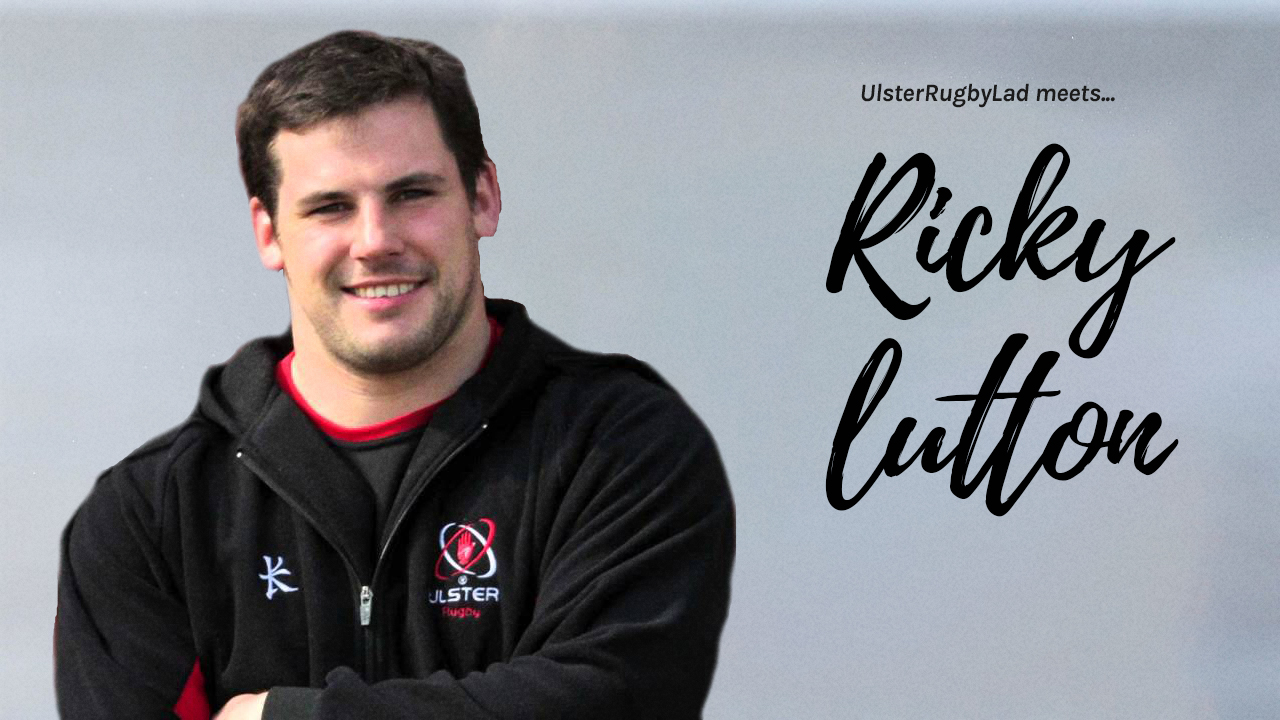 At the age of 25 Ricky Lutton had not played for Ulster at any level and had given up his dream of becoming a professional rugby player. Here, he chats to Ulster Rugby Lad about making that dream a reality.

Who or what made you passionate about rugby?
Undoubtedly my dad, by all accounts he was a cracking prop in his day…back when you could be 13 stone and still dominate a scrum, he had a reputation as being a fierce man!!

I was brought up on rugby and started playing with a rugby ball as soon as I could move, it’s in my blood.

Who was your biggest influence growing up (both in rugby and outside rugby)?
Obviously parents have had a huge influence but outside of family I think my coaches at Ballyclare High had a great influence: Tommy Young and Frank Gault. It’s a great testament to the way they coached the game that so many players from generally unsuccessful school teams went on to play in the All Ireland League for big clubs – the focus was on developing rugby players and rugby men and was not all about winning schools cups like it is now. They were also responsible for turning me from a back rower into a prop, without that move I would never have achieved what I did in the game. I owe them both a huge amount and its great to bump into them now and again.

When did you first think you had a chance of making it as a professional rugby player?
Like most kids who are rugby mad you grow up wanting to be a pro, nothing really happened for me at school and I had made my peace with the fact that my chance had gone.

I was 25 and had never played for Ulster at any level, I was just enjoying travelling the world playing rugby, it had taken me to England, Japan, Canada, Australia & New Zealand. I guess playing a season in Christchurch with and against some really top players made me think I could give it a crack when I got home, Scott Robertson gave me the confidence that I could be a successful professional.

What is the best advice you have been given?
You’re a long time retired.

What would you tell your 17 year old self?
Don’t drink as much, invest some money in an ISA and challenge people more when I think they are wrong, don’t be afraid of ruffling a few feathers.

What did you learn about rugby in New Zealand?
That I was a better player than I gave myself credit for. But also a far greater appreciation of the game as a whole and how the role of a prop fitted into that, it wasn’t just scrum and ruck, they expected everyone to be able to do any job in open play – it was a terrific freedom to play with.

What were you thinking of doing if you didn’t play for Ulster?
I studied Sports Science at Loughborough and I’ve always been into all sports so I was hoping to find a job in that industry.

What was best and worst thing about being a professional rugby player?
The worst was not being picked and then not being allowed to play club rugby, it was so frustrating being fit and available and not getting to play rugby.

The best for me was the half lap of Ravenhill after the warm up, that made you feel invincible, I get goosebumps just thinking about it – it’s one of those things that you can’t replicate outside of sport.

Career highlight/lowlight?
Highlight – my first start down at the RDS when we beat Leinster down there, I probably didn’t realize the enormity of it at the time, we haven’t won there since!

Lowlight – the Pro12 Semi Final against Glasgow, and the Matawalu dive incident, that will haunt me for the rest of my life, I feel like I let the entire province down and that’s something that never goes away. The fact that diving in rugby has become more and more prevalent in rugby really worries me.

What advice would you give to young props coming through at Ulster?
You’re judged on your scrummaging, if you can’t scrum you won’t get picked, so work on it. In addition you need to find a strength and make it a stand out – it may be breakdown work, ball carrying, tackling, fitness, but have something that makes you stand out from the rest.

When you think of the word ‘successful’ who’s the first person who comes to mind and why?
Rory Best – he’s done things with Ireland that no-one has ever done before. He’s a great example because he proves that success directly correlates to hard work – he was the hardest working player I ever came across.

What is your favourite documentary or movie?
Prefontaine (Based on the life of Olympic hopeful Steve Prefontaine, a long distance runner who lived in Oregon and died young).

What obsessions do you explore in your free time?
I like horse racing and can sit and watch most other sports, beyond this I spend most of my free time walking the dog!

What topic would you speak about if you were asked to give a TED talk on something outside of rugby?
I had to google what a TED talk is so I doubt it’d be much use to anyone! I’m quite interested in psychology so id have a go about why I think most people are so stressed with their lives.

What is the best/ most worthwhile purchase/investment you’ve made?
I invested in some Cryptocurrency a couple of years ago, it went up and came right back down again, so time will tell whether that was a good or bad investment, but I genuinely think it will revolutionise the banking system for the better once the regulations settle down.

Do you have a quote you live your life by or think of often?
I came across this poem when I was younger and it has stood me in good stead:

When things go wrong as they sometimes will,
When the road you’re trudging seems all up hill,
When the funds are low and the debts are high
And you want to smile, but you have to sigh,
When care is pressing you down a bit,
Rest if you must, but don’t you quit.
Life is strange with its twists and turns
As everyone of us sometimes learns
And many a failure comes about
When he might have won had he stuck it out;
Don’t give up though the pace seems slow –
You may succeed with another blow.

Success is failure turned inside out –
The silver tint of the clouds of doubt,
And you never can tell just how close you are,
It may be near when it seems so far;
So stick to the fight when you’re hardest hit –
It’s when things seem worst that you must not quit.

What is the worst advice you see or hear being dispensed in the rugby world?
I really don’t like coaches telling players to treat huge games as “just another match” – they aren’t, they are special occasions that can really bring the best out of people, but you must acknowledge and harness that energy or those games can just pass you by.

How has a failure, or apparent failure set you up for a later success?
Perhaps not failure, but mistakes, mistakes create experience, the key is to learn from your mistakes and not to repeat them. I try to live like this, its not always easy but the most successful people I see are ones who don’t make the same mistake twice.

What have you changed your mind about in the past few years? Why?
Coming out of the rugby bubble is a bit of a rude awakening, everyone tells you that you are so desirable and employable and that companies will be desperate to employ you; this simply isn’t true – the Ulster Rugby “connection” lasts maybe 12 months and then your in the same rat race as everyone else and you have to try to become outstanding at something new. It’s been a lot more difficult a transition than I expected.

What are you doing now? Both at Ballyclare and beyond?

I am still officially player/coach at Ballyclare – I tore my ACL helping out my old club Belfast Harlequins at the tail end of last season. I’m still unsure if that is a career ending injury or not – I’m 8 months post op and still not very close to being fit to play so that is a wait and see. I’d love to play another season for Ballyclare but I won’t risk my long term health if my knee doesn’t come right.

I will continue to help out coaching for as long as the club will have me.

Beyond that I am working for The Karl Group – a family based Asset Management and Construction company based just outside of Templepatrick – they took me on with no experience in this industry just under a year ago and I’m under no illusions as to the risk they took on me and I’m incredibly grateful to Aran Blackbourne for taking the chance. I’m really enjoying it and although a much slower pace than rugby, it’s an enjoyable industry to work in.

What are your ambitions as a coach?
Very limited, I enjoy working with the local guys who I played with at school, and some younger guys I coached when I helped out at Ballyclare High and a few in-between. The beauty for me is every player bar 2 in our squad is from Ballyclare Mini Rugby, Ballyclare High or Ballyclare Secondary – the other 2 went to Belfast High, so everyone is local and it’s a great community club.

We have been pretty successful in the last number of years in terms of being in the mix for the Qualifying League 1 Title, Towns Cup and playing in the All Ireland Cup.

This is the limit of my ambition really, I’ve no desire to coach in the All Ireland League or beyond – that involvement in high end rugby is behind me and I really enjoy the craic of being back at my local club.