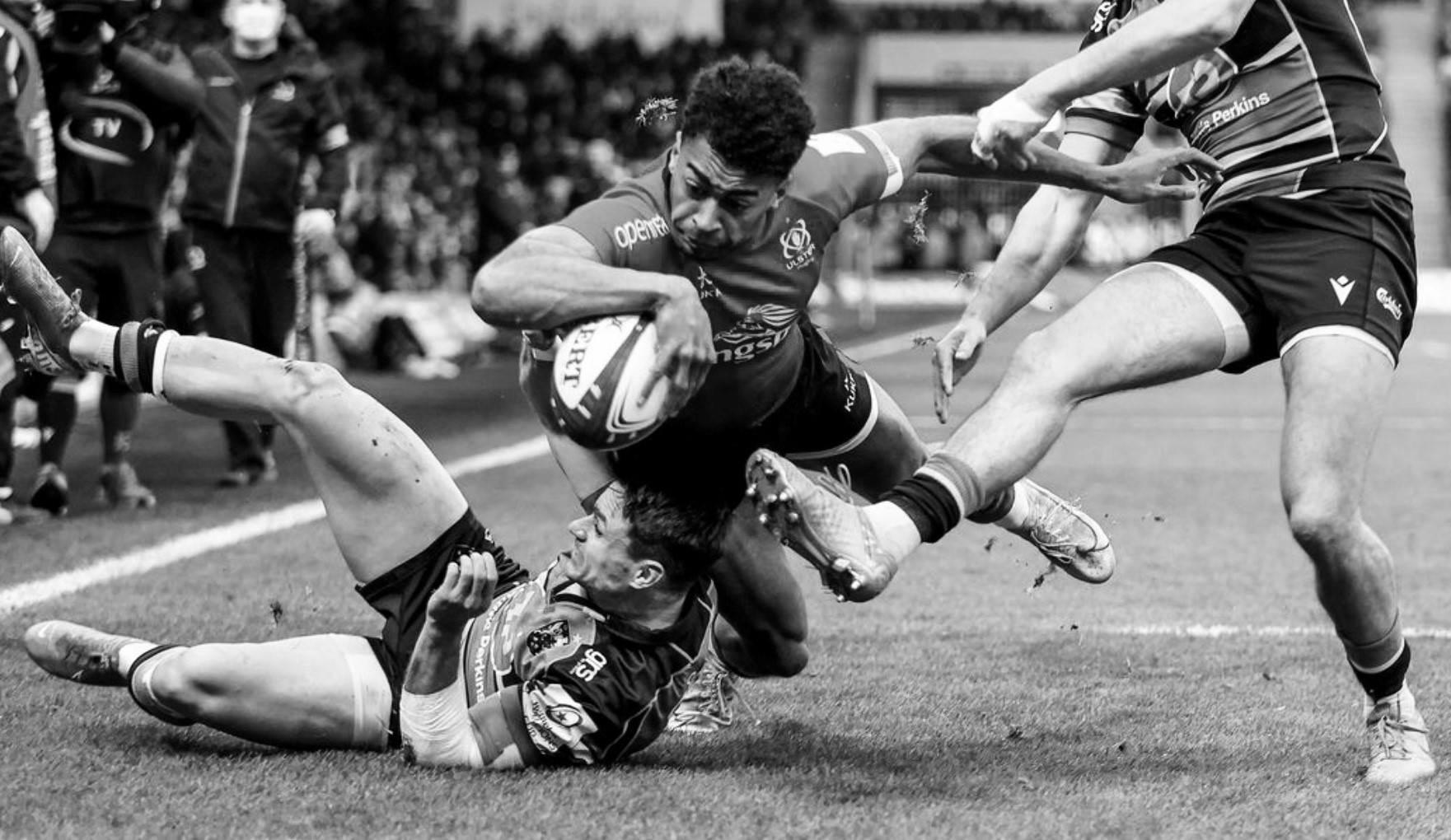 Job done. Ulster’s European record this season now stands at three wins from three as last-16 qualification has been secured with a game to spare. Sunday’s 20-24 win over Northampton was probably closer than it needed to be in terms of the scoreline reflecting Ulster’s upper hand, but a bonus point victory away from home is nothing to be sniffed at, even if it was against a Saints side that has fallen out of love with Europe having continually struggled in the competition of late.

There is plenty to take from the result then as Ulster responded well to last week’s disappointment in Thomond Park. Here are five talking points from the win – the red jerseys aside, they definitely need to be worn more often.

Ulster came into Sunday having averaged the most points scored in the first 20 minutes of European games this season. Northampton averaged the most points conceded during the opening quarter. The trend continued as Dan McFarland’s men were up 12-3 at the 20 minute mark. The ability to start so quickly is obviously a plus, but it becomes even more valuable away from home in Europe when you can take a hostile crowd out of the equation.

Robert Baloucoune’s talent is no longer a well-held secret known only by Eniskillen locals. That being said, it is rare you see a wing having such an impact on a game given how few opportunities on the ball you get in that position.

The point here is that as a wing, naturally your number of involvements in a game are lower than other positions simply due to the width you maintain. Sunday was a rare example of a wing having so many impactful moments despite little opportunity to stamp his mark on a game. Yes Mikey Lowry was named player of the match, but as a fullback you get on the ball plenty. His back three partner was arguably more impressive since nearly every time he came into the game he had a substantial impact (I say nearly because the only blemish for Baloucoune was an ill-judged 58th minute offload).

Baloucoune’s score in the 7th minute was an excellent example of his ability to pounce on any opportunity to leave a mark on the game. Scooping up a loose ball, he fends off Tom Collins before dipping the shoulder into the attempted tackle of George Furbank to power his way over. Handling skills for the scoop, power for the fend and shoulder dip; it was an excellent finish.

Baloucoune was also heavily involved in two more scores, those of Nathan Doak and Lowry’s second of the day. Instead of finishing them off himself, the wing’s strength to ride contact and free his arms for the offload was what led to the tries.

However, it was not just in attack that Baloucoune had an impact. Saints hit back to going 12 points down through a Dan Biggar try, but it very nearly was disrupted by a fantastic piece of cover defence from Ulster’s wing.

Baloucoune makes up a hell of a lot of ground, displaying speed and athleticism to make a dominant tackle on Collins despite being in scramble mode. It looks like he has done enough to force the final offload to Dan Biggar to drift forward, but unfortunately from an Ulster perspective, there wasn’t the side-on camera angle to show it. A bad result for Ulster in terms of a try, but Baloucoune’s work rate and athleticism was something to behold here.

Finally, and this is what puts Baloucoune above many other wings in the Irish system for me, the Eniskillen man was brilliant in the aerial contest. On more than one occasion he won back the ball while chasing a teammate’s kick, but this one late in the piece was the pick of the bunch.

Andy Farrell is clearly a Baloucoune fan, though the two men ahead of him in the Ireland pecking order, Andrew Conway and James Lowe, had excellent Autumn Nations Series campaigns. Keith Earls is also still in the picture while Jordan Larmour looked like he returned to form on the weekend for Leinster. Still, Baloucoune will definitely be in the 6 Nations squad announced this week and it would not surprise me to see him in the first choice back three by the end of the tournament.

Clearly, everyone was excited to sign Duane Vermeulen’s ball-carrying power and defensive breakdown prowess. His biggest impact on Sunday though came at the set-piece. Lineout nerds (I definitely am not one of these) will tell you that Vermeulen is a ridiculously good jumper on both attacking and defensive throws, especially for his size and position – how many number eights are as good at him at the lineout?

On Saints’ first throw of the game, Vermeulen marked the front and put in a good contest that forced the hosts to work hard to secure the ball. The Springbok almost exclusively marked the front of the lineout for the whole game, forcing Northampton to take more risks towards the middle and the tail. After nearly scuppering the ball the first time around, Sam Matavesi steered clear of the front with his throwing for pretty much the rest of the day. 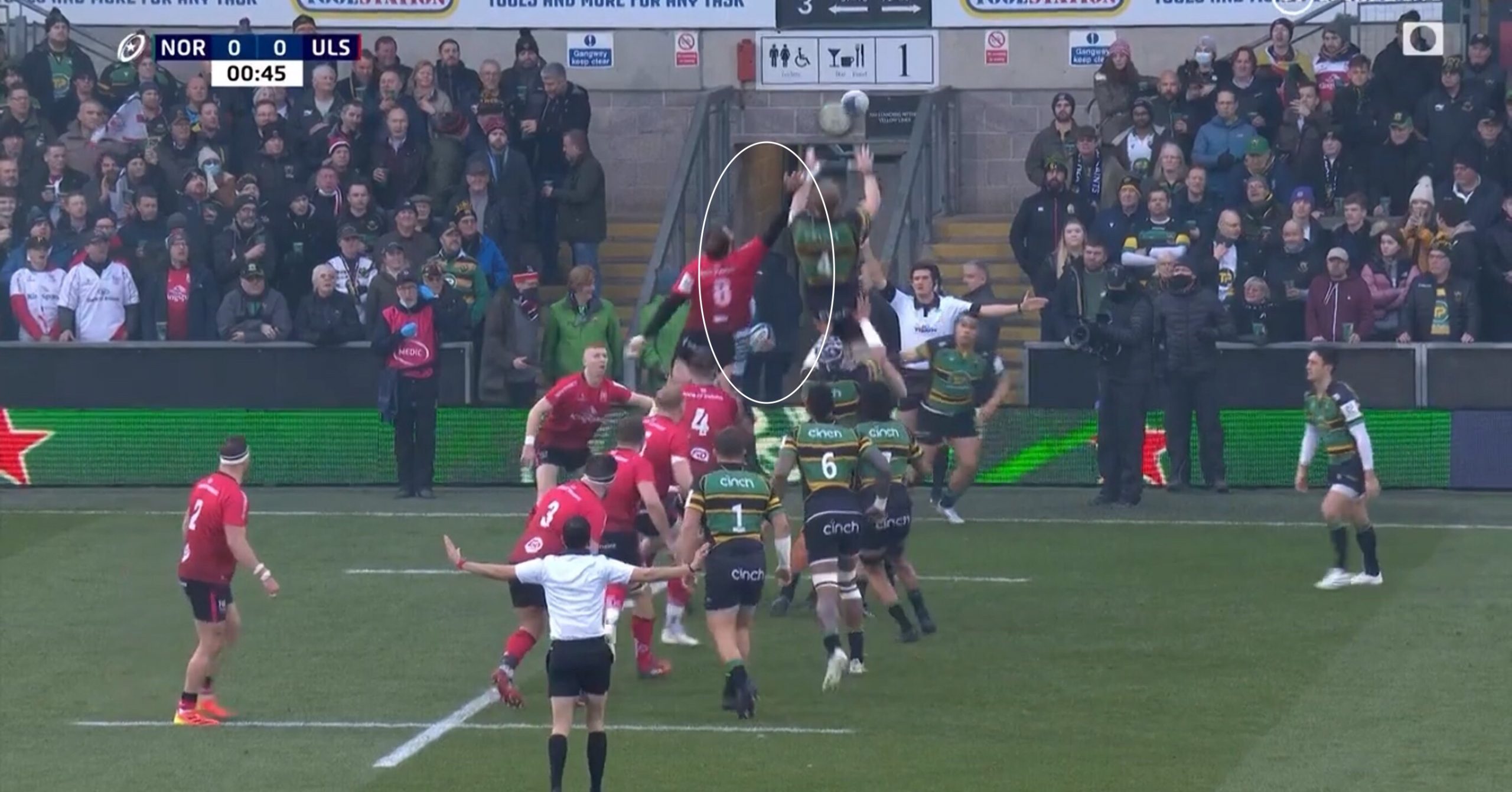 Vermeulen was also a regularly used option on Ulster’s ball, particularly in dangerous situations five metres from their own line. Once Iain Henderson returns from injury, Ulster could have a more than useful lineout weapon on both sides of the ball.

Austin Healey mentioned it on commentary (rare agreement with Austin alert), but Doak continually picked the right option to show his carrying threat off the base. The break comes to nothing as Ethan McIlroy’s kick goes out on the full, but keep an eye on where Doak is looking from the maul.

It seems simple, but the speed of thought to identify a two on one mismatch against the opposition hooker Matavesi with the rapid McIlroy on the outside is sign of a very good rugby brain. Another young, exciting Ulster back we all know about, but it is worth flagging how good he was with ball in hand on Sunday.

The other interesting thing about his performance was how much responsibility Doak was given when it came to territorial kicking, even though it was his first European start. While he and Billy Burns were on the pitch, not one of Ulster’s kicks for positioning was launched by Burns. Ian Madigan took on some of this responsibility when he came on, but before that a lot was asked of Doak’s box-kicking. One or two long, uncontestable efforts aside, the results were good.

Needless to say, a big scrumhalf who makes good reads, carries well and has a decent kicking game is a valuable asset.

Northampton scrum coach Matt Ferguson did an interview during the game where he expressed frustration at Saints’ inability to prevent Ulster from slowing the ball at the breakdown. Clear-out assignments were missed and Northampton did not play with their normal tempo, but credit must be given to Ulster here.

Their system is quite clearly to contest as many breakdowns as possible. Why wouldn’t you when you have jacklers like Rob Herring and Vermeulen? Though not many holding-on penalties came, Ulster did have success in slowing down the ball.

Other teams have different systems. Take Leinster, who instead opt regularly not to compete on the deck and instead fan quickly out and give their defensive workhorses like Josh van der Flier time to fly up off the line (pun very much intended). Ulster have displayed impressive line speed of their own at times, but these are two different ways of going about things for sure.

The one potential pitfall that comes with Ulster competing so often is if they do fail to slow the ball down, they risk being narrow in the line having conceded fast ball despite bodies being committed to the deck.

The system works so long as you slow the ball down. It will be interesting to see its success or lack thereof against sides with better attacking breakdown skills than Northampton.

One more pool game remaining then against a Clermont side that Ulster definitely will not fear after already seeing them off away from home. Clermont are not the force they once were, but still are in the hunt for qualification and picked pretty much a locked and loaded side for their win against Sale on the weekend.

A win for Ulster isn’t the be all and end all given last-16 rugby is secured, but positioning in the final standings could be crucial. Even more importantly for a side that has lacked consistency a touch all season, the confidence from backing up Sunday with another good performance in front of the home faithful would be invaluable.