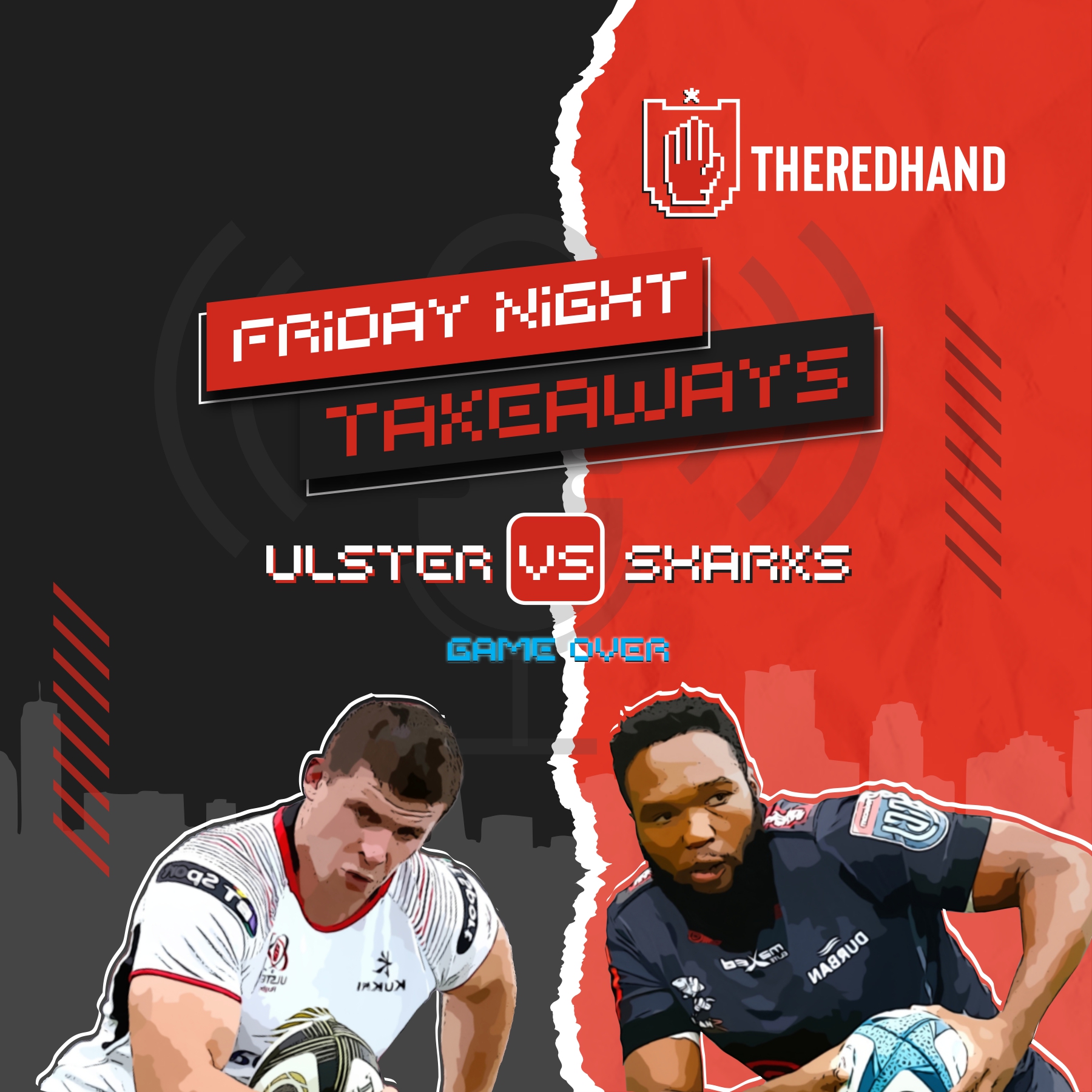 Ulster vs Sharks: Three Takeaways from Ulster’s Round 18 win

After 18 rounds, 12 wins and 6 losses, the regular season finally came to a close for Ulster on Friday night against the Sharks. With Ulster finding their strongest runs of form at the start of the season and new year, there’s an argument that the province’s 6 losses mainly came as a result of the squad struggling to give the same focus to both European games and the URC. However, Ulster’s focus has been singular since April 30th – this Sharks league game – and it showed in how they played last Friday.

Ulster did their homework

Since the first South Africa tour game on March 26th, Ulster played 6 games, back-to-back including the Toulouse games. There’s no denying that getting a 20-day ‘rest’ after that makes a huge difference to a team’s physical condition – Ulster were able to pretty much name their best 15 last weekend. However, what it also allows a team is time to analyse and scheme against an opposition side to a level above the norm.

If we look at the style of rugby the Sharks play, they are in many ways a typical Kick-Pressure-Score South African side;

Looking at the makeup of their team, this style makes sense. Curwin Bosch’s massive boot at 10 has contributed to the Sharks kicking further than any other team in the URC this season, bar Leinster (15175m vs. 14994m). 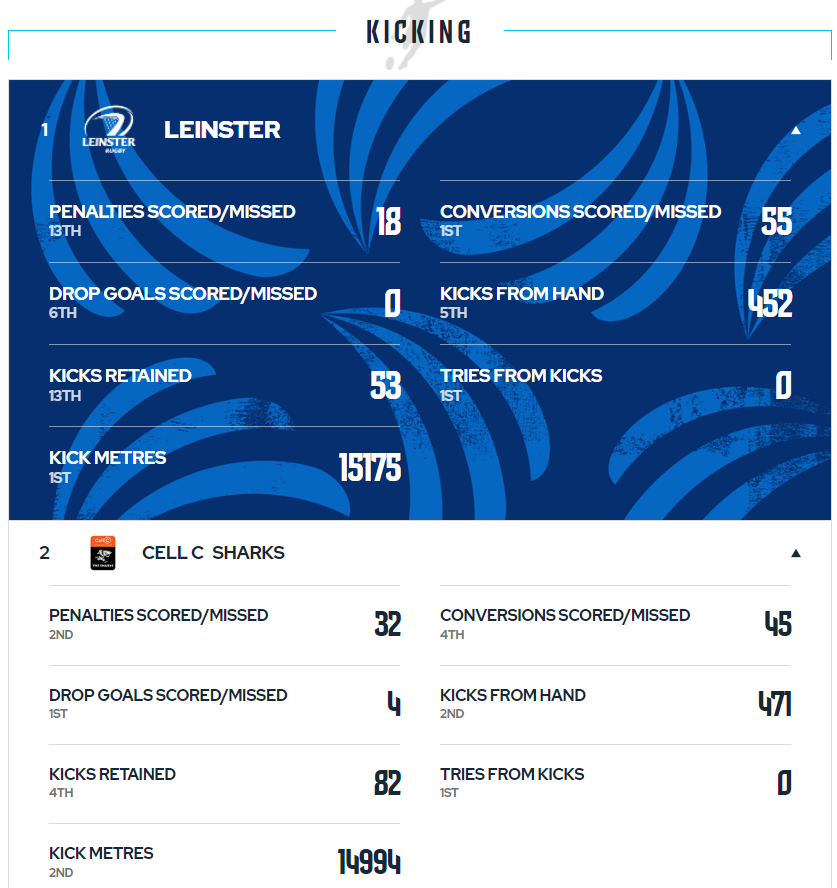 Graphic courtesy of the URC and unitedrugby.com

The Sharks also have a huge pack; with Springboks front rowers like Bongi Mbonambi, Ox Nché and captain Siya Kolisi having helped take apart both Leinster and Connacht at set-piece in their two previous games.

Their backline has two key members of the Springbok defence out wide in Lukhanyo Am and Makazole Mapimpi – whose pace also makes them huge counter-attacking threats, along with Aphelele Fassi and Werner Kok.

Ulster are also pretty good, but you get the picture; the Sharks have got some great athletes and Ulster were going to have to be able to handle this pressure game as well as play their own.

So how did Ulster do it? We’ll go into a bit more detail now, but essentially by limiting the Sharks opportunities to impose their style of rugby.

Sometimes at scrums, you’ll see front-rowers pump their feet after the hit, locks come up off one knee or back rowers start with a split stance. That’s when aggressive scrums like the Sharks’ catch opposition teams on the hop.

If we look at the feet of Ulster’s 8 forwards here though, they’re all planted before the referee calls ‘set’. That contact with the ground makes the Ulster scrum much stronger and, along with bringing the height of the scrum down, this makes the window for the Sharks to get a shove on much smaller.

Ulster did concede one scrum penalty in the first half, but it was their only penalty in any part of the game during that half. One penalty conceded in 40 minutes of rugby is pretty remarkable. Suddenly one of the big weapons in the Sharks arsenal for generating territory, penalties and points wasn’t as effective.

Against the Sharks maul, again the Ulster pack’s focus was on containing the South African’s drive as a unit.

If we look at the Sharks maul above, part of Ulster’s success once more is in planting their feet early.

What really tightens the seams of this maul defence however is how the forwards bind on to each other and set low to create a net around the Sharks maul before Vermeulen comes in last to steer the shove towards the touchline.

The turnover is the cherry on top, but again it’s a huge effort from Ulster to deny the Sharks any entry into the game.

As much as forwards would like to tell you so, rugby isn’t all about scrums, lineouts and mauls though. Sometimes you’ve got to kick too and Ulster again did this in a way that limited the Sharks game, especially off counter-attack.

Referring back to the Sharks games against Leinster and Connacht again, both provinces like to kick long and keep the ball in play. However, this gave fullback Aphelele Fassi and Co. time to counter which eventually hurt the Irish sides.

To reduce the chance of this happening to them, Ulster started the game by kicking long and into the stand from the 22 on the first three occasions. Once the Sharks cover backs started to drop deeper to counteract this, Cooney began putting contestable box-kicks on top of the more isolated no.8 Phepsi Buthelezi with Baloucoune chasing. Although this wasn’t a source of tries for Ulster on Friday, it crucially wasn’t for the Sharks either – putting a lot of pressure on their ability to get close to Ulster’s tryline and produce points in other ways.

Even when you’ve got the best intentions to stop teams moving forward in defence, you’ve got to win the ball back too. Across the back row especially last weekend, this was something that Ulster did exceptionally well.

First out of the blocks was Ulster’s own Springbok – Duane Vermeulen.

While the Sharks are looking dangerous here and building a lot of momentum, if we just focus on Vermeulen, he stays patient and turns down two chances to enter lost cause rucks before stealing the ball at the third. When you think of a Springbok no.8, the first thing you usually think is ‘physicality’, but Vermeulen’s ruck smarts to pick the right moment is what’s invaluable to Ulster in stopping the Sharks here.

Nick Timoney would get another timely turnover two minutes later, with Ulster’s first three points also coming from a Henderson strip on Sharks 9 Jaden Hendrikse. That ability to continually halt the Durban side’s momentum while generating points was vital to Ulster establishing a foothold early in the game, and maintaining it later on too.

Ulster were at times fortunate with referee Ben Blain’s interpretation at the breakdown in this game, but sometimes you can make your own fortune too.

Put in the kind of work that Cooney and Mattie Rea do off the ball to win the race to the ruck, add in the consideration that Ulster have conceded the fewest penalties in the URC this season (refs analyse teams too), and sometimes you’ll get the rub of the green.

It was a fitting end to the game that it finished with another turnover from Timoney – the Man of the Match’s third. Whenever there was a big pressure moment in the game, one of Rea, Vermeulen or Timoney especially seemed to step in with the big steal.

Much like in defence and at the set-piece, it was clear that Ulster had identified areas in attack where they could hurt the Sharks pre-game – mainly in the 10 channel and space outside the wingers.

Admittedly, Ulster were quite sloppy with some of their execution in attack early on especially – something Dan McFarland mentioned post-game. Including the one below for example, McIlroy had two handling errors with clear overlaps wide right which he would have liked back.

However, what was encouraging was the variety of ways in which Ulster managed to manipulate the Sharks high defensive line on the outside especially against two defenders of the quality of Am and Mapimpi. Grubber kicks, cross-field chips, pullbacks to Burns like above; Ulster rarely allowed the Sharks defence to get into any kind of rhythm.

Taking Ulster’s first try, they know that the Sharks like to push high on the 2nd pass out wide and only operate with one player behind inside their own 22 – a 14-1 defence.

By crashing the ball up twice, the Sharks defence is conditioned to expect another double tackle and honeypots around the Ulster 13. A quick call from Burns to Hume for the pass however leaves the Sharks defence in no-man’s-land and McIlroy does exceptionally well after getting the ball to draw and step the cover before offloading to Lowry.

The dominance of Stuart McCloskey at 12 certainly deserves a mention too, with the Bangor Bulldozer giving the likes of Curwin Bosch and Marius Louw no end of trouble in the carry.

If the Sharks defence often felt the need to step in rather than cover the wing, a large part of it was down to McCloskey’s threat at inside centre.

Although the final scoreline will say that this was a close contest, for the majority of Friday’s game, this was a performance of admirable maturity from a team who look comfortable in their own skin. Ulster’s ability to adapt their game, stay disciplined, win the big defensive moments and have an attacking edge too certainly bodes well.

There’s still room for improvement – that last 18 minutes is a good place to start if they’re to beat Munster. However, there’s a real sense now that this Ulster side feel ready to take the next step.